– CLICK THE BUTTONS BELOW TO JUMP TO EACH SECTION –

SHINING A LIGHT IN THE DARK
MARGARET RIVER – A MASKED OWL STRONGHOLD
THE HUNT FOR LOCAL MASKED OWLS
SECRETS REVEALED
THE BREEDING CYCLE
A SUSTAINABLE POPULATION?

SHINING A LIGHT IN THE DARK 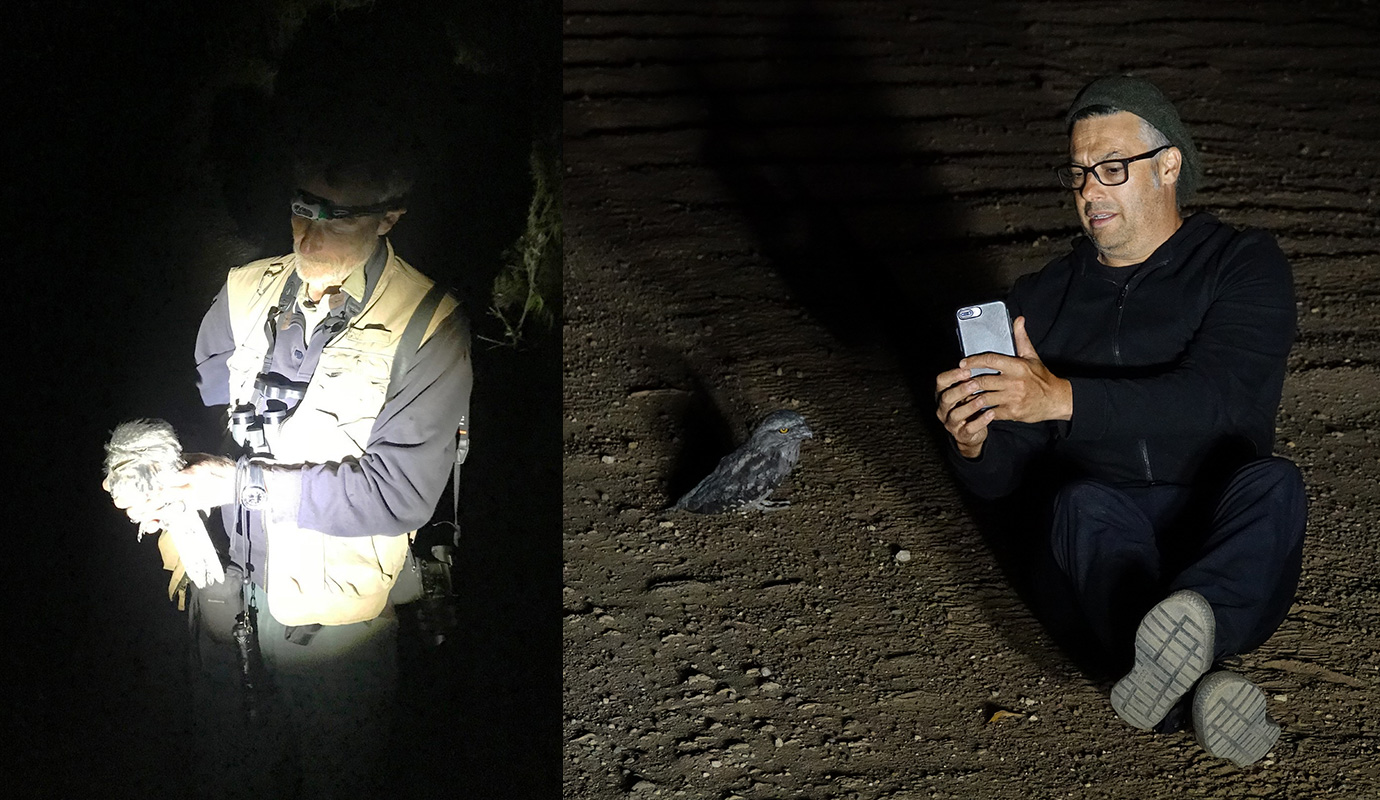 So secretive is the Masked Owl that nesting has never been described in south-west Western Australia. Until now, when three years of obsessive nocturnal detective work by local enthusiasts has revealed Masked Owl pairs breeding throughout the Capes landscape.

An ongoing study linked to the Owl Friendly campaign is being led by retired ornithologist Dr Boyd Wykes and amateur wildlife photographer Steve Castan, known as estabanthenatureman on his popular Instagram site. Owl Friendly supporter Phil Pain of Eagles’ Heritage in Margaret River is providing insight based on years of caring for birds of prey. 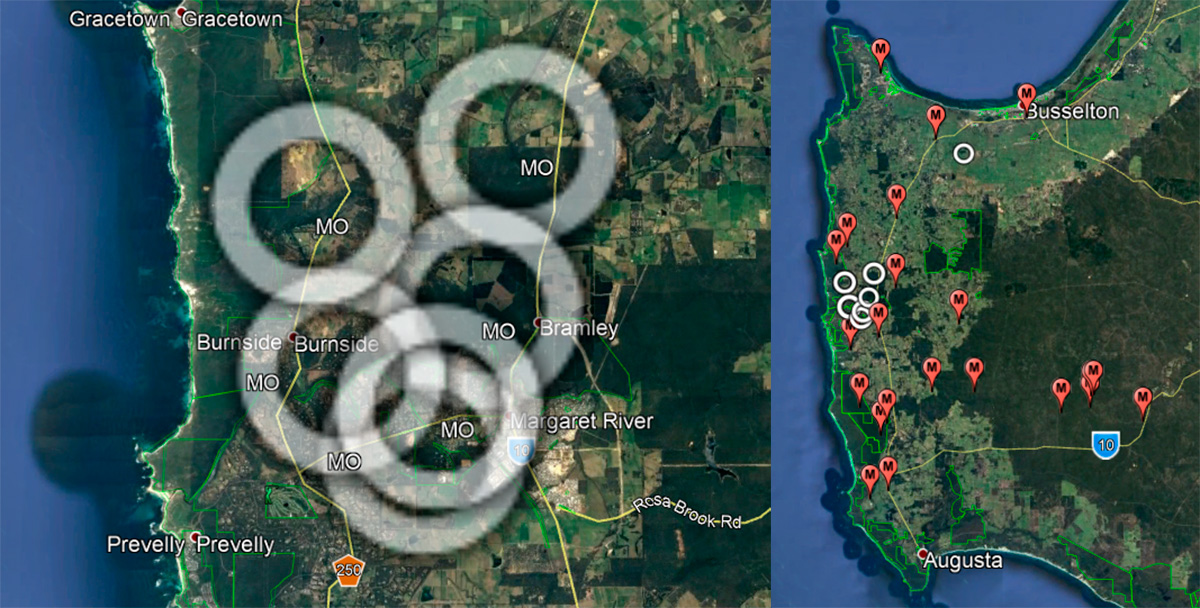 Boyd and Steve have monitored breeding by five pairs around the Margaret River township plus another near Vasse. They have also logged dozens of other Masked Owl locations throughout the Capes (and inland along the Blackwood River).  A combination of extensive native forest in reserves, along waterways and on private land, interspersed with farmyards and housing in patches of agricultural and peri-urban subdivision, with ancient marri and karri retained throughout, is proving to be an ideal landscape for Masked Owls to thrive.

THE HUNT FOR LOCAL MASKED OWLS

The tools of the trade for investigating Masked Owls, apart from patience, warm clothing and insect repellent, are high quality head-lamps and hand-held torches with red as well as white light, red light not being visible to night animals; binoculars; cameras and sound recorders; and a GPS location recorder.

A call play-back unit with amplifier is used to initially survey and locate Masked Owls. Playback is only used judiciously for research purposes. Technically call-playback can constitute ‘disturb’ under the legal definition, and hence require authority to disturb (under the BC Regs either 25 or 31).

With approval of land holders, song meters are attached to trees and programed to record sound from dusk to dawn.

Recordings, analysed when translated to sonographs, identify presence of Masked Owls and other night life; dusk and dawn calling that indicates roosts; intimate courtship calling of chuckles, bill clatters and purring; the continual, monotonous begging of nestlings and fledglings and the chaotic begging when adults eventually arrive with captured prey. Very little adult behaviour is directly observed in order to avoid disturbance.

Sonagram of a pair of Masked Owls exchanging contact screeches

Sonagram of a begging duet by two fledgling Masked Owls

Sound recordings of local birds are ‘played back’ at prospective localities to identify new areas of Masked Owl activity; primarily in autumn when pairs are vocal and responsive as they prepare for mid-winter nesting. Photographs are taken of responding birds for ID purposes, ideally with one person steadying the camera while the other holds a torch. To avoid undue disturbance, wildlife specialist red-light torches are used to observe behaviour, with white light only used judiciously, particularly to obtain ID and developmental stage photographs. We do not use flash light as the sudden burst of bright light may be an issue for the bird.

This clip focuses on the extraordinary calls – screeches, cackles, chuckles, coos and purrs – of south-west WA’s enigmatic, charismatic Masked Owls, many recorded for the first time. Margaret River owl enthusiasts, retired ornithologist Boyd Wykes and lawyer/photographer Steve Castan, aka estabanthenatureman, share their recordings to raise awareness that just as they were discovering that these largest of our owls are living on town outskirts feeding on introduced rats and mice, liver testing is showing that they are being poisoned by widely used anticoagulant rat baits.

Each life-long pair hunts an area about six kilometres across, nesting in deep hollows of ancient karris and marris but heading out at night to hunt the rats and mice of adjacent farmland and outer suburban ‘life-style’ subdivisions.

Adults and fledglings roost in dense foliage of middle and upper canopy trees including peppermints, eucalypts and even pines, rather than the hollows reportedly favoured by some eastern states populations.  Adult pairs usually roost apart but sometimes together, as also for fledglings. Roosting owls are incredibly difficult to spot even at a known location. Surprisingly they are seldom harassed by day-time birds, likely because they are not recognised as a predator due to the way the facial disc is folded at rest. 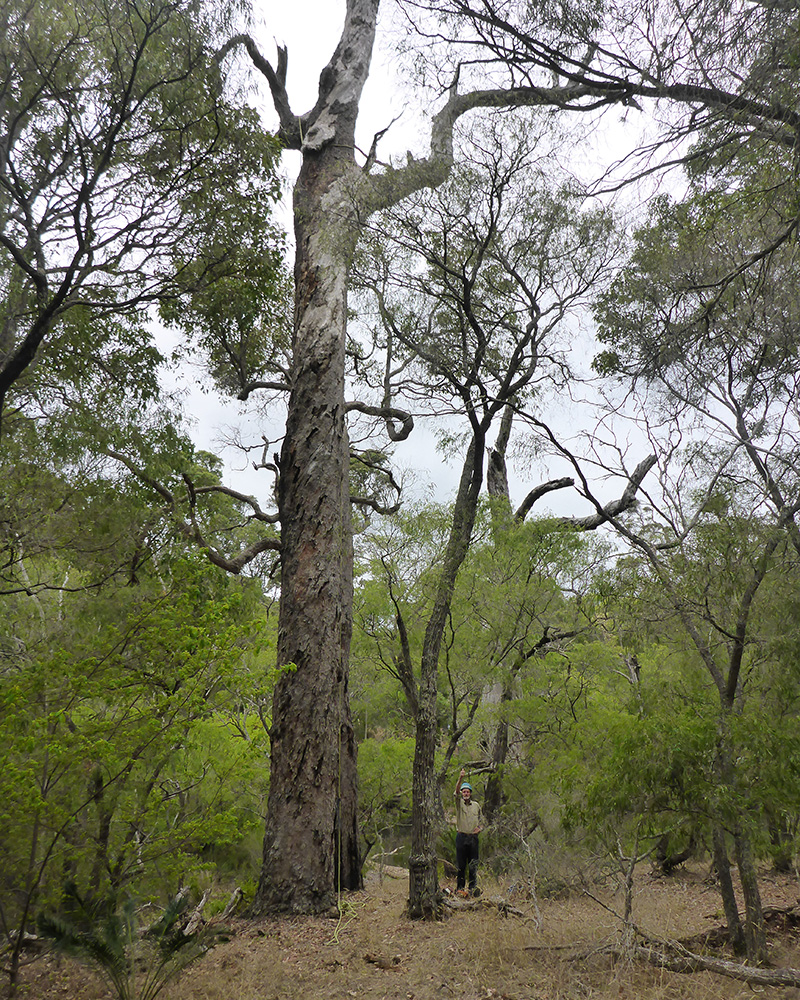 The nest hollows are high in ancient marri and karri, some alive, others a dead chimney.

Access is often via a vertical opening but probably the key requirement is a large internal bowl where up to four nestlings can mature. One of the pairs has successfully used nest hollows from one year to another, indicating that there may be a choice of suitable nest sites in some pair’s home range. 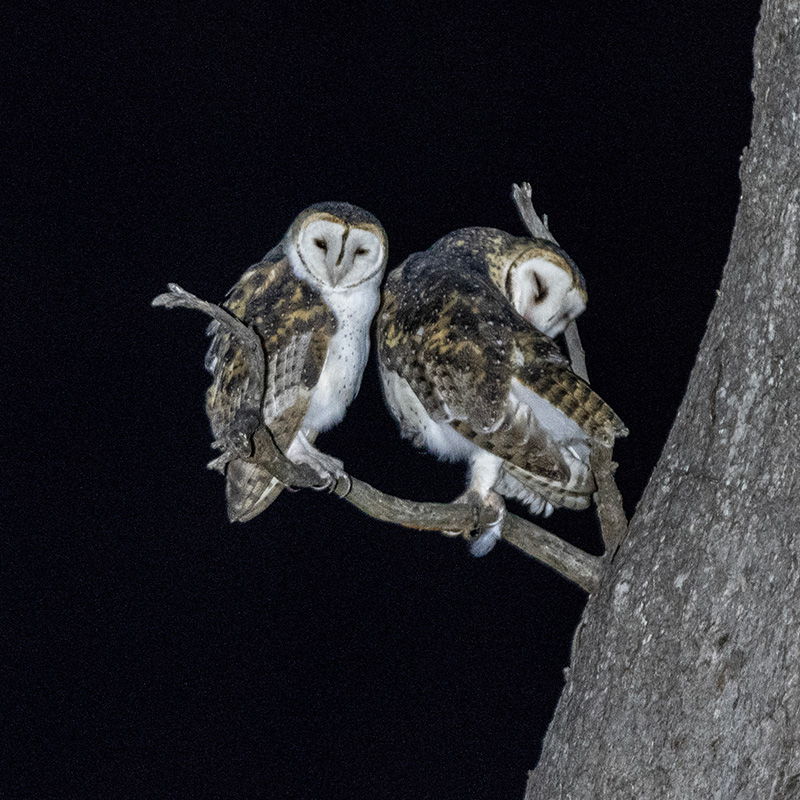 Masked Owls form permanent relationships and are long-lived, likely 15 years and more for those that achieve a breeding partnership.

Female Masked Owls weigh as much as 900 g compared with the 500 g or so of the male.  However seen and photographed on their own at varying perch heights, a decision on sex can be uncertain. As a general rule, females can also be distinguished by frontal dots that are large ‘chevrons’ compared with smaller, often less numerous spotting on males. This is particularly apparent when adult pairs and siblings are seen together. Bold spotting of unworn frontal feathers is characteristic of youngsters.

A Masked Owl pair’s annual cycle starts with high activity in autumn-winter when territorial and pair-bonding banshee screams are exchanged throughout the night – often mistaken by people for fighting Brush-tailed Possums.

This is followed by a quiet period while the male is busy attending the female, ensconced in a deep nest hollow brooding her clutch of two to four eggs then caring for the young chicks.

All remains quiet until the chicks are old enough to perch on the rim of the nest, from where their short raspy cough-like calls are projected into the night to encourage both their parents to provide food. From late spring/early summer until autumn, they will beg throughout the night, first as emergent nestlings, then as ‘branchers’ moving around the nest tree, and then as fledglings, emerging from their roosts to station on prominent, favourite ‘begging perches’.

A scary screech, chuckles and bill-rattles followed by frantic cries announce another rat brought to feed ravenous nestlings perched on the rim of a deep hole, high in a marri. 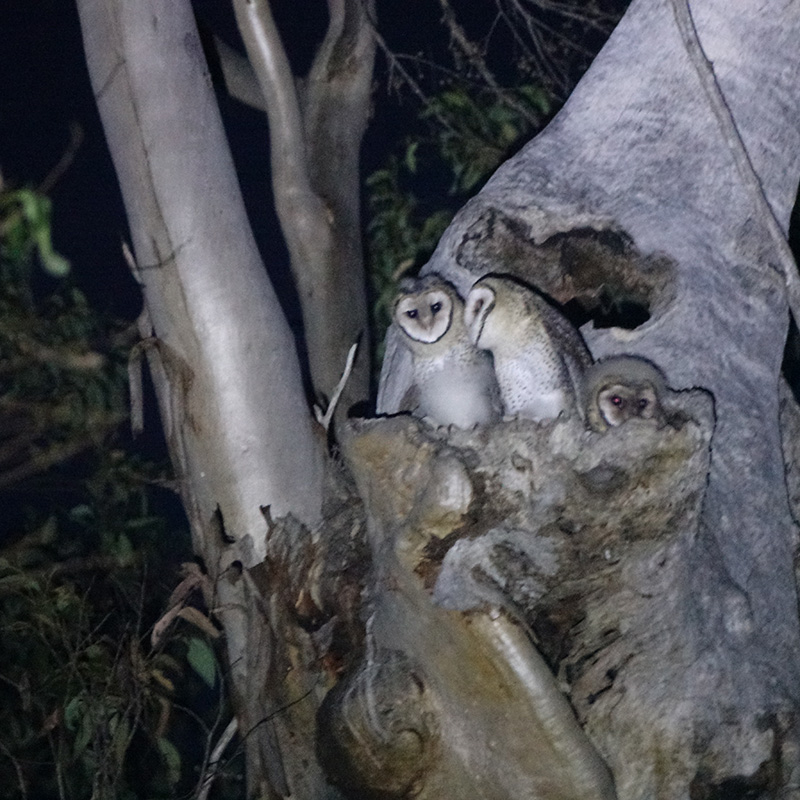 Staggered ages of four sibling chicks, three at the rim (left) and one below (right).

The eggs are laid over several weeks, with chicks hatching, maturing and fledging sequentially. First-fledged young fly back to the nest at dusk from roosts in nearby tree canopies to beg with sibling chicks, then when all are fledged the siblings still come together at favoured ‘begging perches’ close to the nest tree.

When they come together the youngsters show affection rather than competition, often touching bills, preening each other a little, then begging in unison, the short begging screech of one followed by another throughout much of the night.

‘Caching’ of excess food has been recorded on two occasions, with a fledgling heading straight from its roost to retrieve excess food from the previous night – a rat from a tree hollow and the hindquarters of a rabbit from a cleft on the side of a trunk. 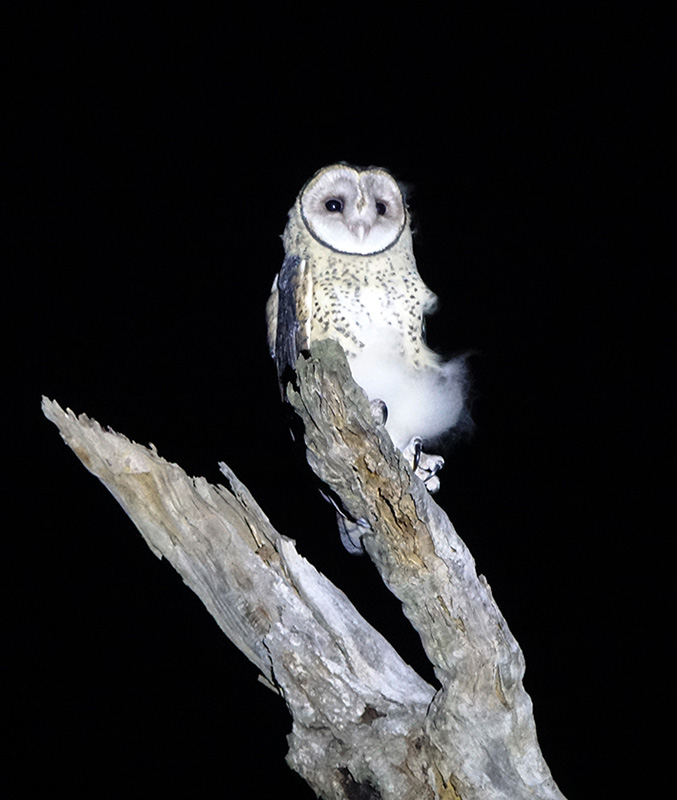 The outlook for offspring is pretty dire. More eggs are laid and chicks hatched than can be raised in most seasons, on the off-chance that food will be abundant in some years. The Margaret River experience is that although up to four eggs can be laid, no more than two and often only one fledgling makes it through to independence in early autumn.

A particularly risky time is when older fledglings are learning to hunt, easy targets for foxes when hopping around on the ground with their attention on an insect or a mouse. Vehicle strike is a risk for both adults and dispersing young, with six Masked Owl vehicle casualties recorded during three years of study.

However, evidence that one and sometimes two fledglings make it through to independence in most breeding attempts indicates that a sufficient pool of youngsters survives each year to replace any lost adults and thus sustain the local population.

Margaret River owl enthusiasts, retired ornithologist Boyd Wykes and lawyer/photographer Steve Castan, aka estabanthenatureman tell the tale of two cute Masked Owl chicks, photographed and filmed in their nest close to Margaret River. After they fledged and one achieved independence, the nest hole was investigated, with a surprising discovery. This nest and those of several other pairs near Margaret River are the first breeding documented for the enigmatic, charismatic Masked Owl of south-west WA.